Analysis of Influence of Geogrid on Filling and Digging Junction Subgrade

Abstract: In combination with the actual engineering, the finite element software of Plaxis geotechnical engineering is used to simplify the traffic load into strip static load. Through the plane strain method, whether the embankment is buried with wholesale biaxial geogrid or not, the geotechnical engineering of the filling and digging junction is compared and analyzed. The effect of the grid on subgrade settlement, differential settlement, and slope stability. The conclusion shows that in the project, by laying a biaxial geogrid for sale in the fill embankment, the settlement and differential settlement of the subgrade can be reduced, and the stability of the subgrade slope can be significantly improved.

For the roads in the mountainous areas, the same subgrade cross-section is often found in the subgrade construction, and half of the fills are half-filled. Due to the different thickness and strength of the subgrade and pavement structure layer at the junction of filling and excavation, there are differences in bearing capacity and foundation settlement. If the disposal is unreasonable, it will lead to uneven settlement of the roadbed, cracking and damage of the road surface, staggering the platform biaxial geogrid factory price, and then causing the phenomenon of jumping, which may also cause the stability of the roadbed. Therefore, the disease problem of filling and excavating the roadbed has become one of the common problems in highway construction.

There are many kinds of geosynthetics, among which the biaxial geogrid for sale has a high bonding effect with the soil, and it is embedded with the soil, which has high tensile performance and can improve the settlement of the cross-section of the embankment. Reduce the differential settlement at the junction of filling and excavation and improve the stability of the subgrade. This paper will use Plaxis finite element software to analyze the influence of wholesale biaxial geogrid on the roadbed settlement, differential settlement, and slope stability.

There is no river passing near the location where the slope is located, and there is no erosion of perennial rivers. The water source belongs to the rainfall supply type. The type of groundwater is mainly Quaternary pore diving. According to the engineering geological survey report, the exposed stratum is about 3m thick strong weathered sandstone, purple-gray, grayish-yellow, core-cracked, local sand-like, crack development, hammering and fragile, and weathered agglomerates. The lower part is moderately weathered to slightly weathered sandstone. The rock mass is purple-gray, yellow-gray, rock-like or short-column, hammering and brittle, fine-grained structure, layered structure, and bedding development. Since the history of the region has been recorded, there have been no strong earthquakes.

A road route passes through a steep section of the original site and is partially filled with half of the roadbed. During the construction process, the upper excavated slope material is pulverized and mixed with sand and gravel as a filler for the roadbed retaining wall (Fig. 1). In order to ensure the close integration between the filling roadbed and the excavated roadbed soil, reduce the differential settlement and ensure the stability of the slope, excavate the steps of 1m high, 2m wide and 4% slope at the filling and excavation interface, on the bottom of the roadbed and A high quality biaxial geogrid is placed at each step. The width of the biaxial geogrid for sale is the full width of the roadbed at the setting, and the distance between the edge of the lateral wholesale biaxial geogrid and the slope of the subgrade slope is 0.5m.

The calculation uses Plaxis finite element software, which is a powerful general-purpose geotechnical finite element calculation software developed by PLAXISB.V. of the Netherlands. It has been widely used in finite element analysis of various complex geotechnical projects biaxial geogrid factory price, such as Slope excavation and stability analysis after reinforcement. The PLAXIS series of programs are widely recognized by geotechnical engineering professionals around the world for their professionalism, efficiency, strength, and stability, and are increasingly becoming an indispensable numerical analysis tool in their daily work.

When calculating the field-free strip structure such as subgrade or pavement, it is generally considered that deformation in the extension direction is not generated biaxial geogrid factory price, so the model can be simplified to the plane strain problem, and the analysis model is shown in Fig. 1. The top surface of the subgrade is 7.5m wide, and the elevation difference between the two points of D and E is 5.5m.

The load standard refers to the provisions in the Technical Standard for Highway Engineering (JTGB01-2014). Considering the load diffusion effect of the road surface, the calculation can adopt the uniform load form. The double-row car is arranged 1.5m away from the roadbed. In the calculation, the vehicle load is approximately converted into a strip-shaped uniform load, which is 19kN/m.

The pavement structure is simplified to an isotropic elastic plate structure with an axial stiffness of 2.5×105 kN/m and bending stiffness of 500 kN·m.

The groundwater level is 10m from the bottom. The horizontal displacement of the model is zero, the bottom is fixed and impervious to water.

When meshing the model, it is necessary to refine the mesh of the filled part, as shown in Figure 2.

The reinforcement mechanism of wholesale biaxial geogrid to soil exists in the interaction between grid and soil. This interaction can be summarized into three cases: the friction between the surface of the grid and the soil; the passive impedance of the soil to the grid; The locking effect of the grid hole on the soil. All these three functions can fully restrain the lateral displacement of the soil particles, thereby increasing the stability of the soil to a large extent, and improving the bearing capacity of the foundation and reducing the settlement. 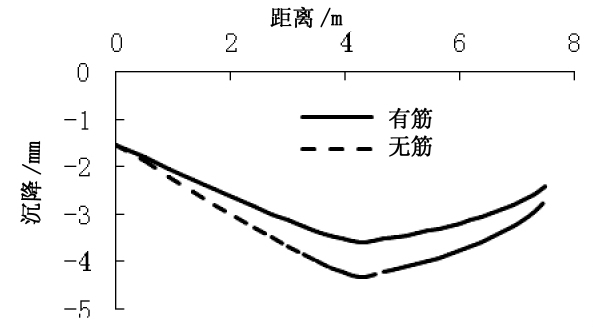 At the same time, due to the difference in mechanical properties of the semi-filled and semi-excavated materials and the uneven thickness of the soil layer, the maximum settlement value occurs at the junction of the filling and excavation when the geotextile is not added to the plain soil subgrade. Since the thickness of the strongly weathered layer of the subgrade is the largest at this position, it can be seen from Table 1 that the strength of the strongly weathered layer is the lowest compared to the backfill and the weathered-micro weathered layer. After the high quality biaxial geogrid is buried in the subgrade, the maximum settlement value is reduced (Fig. 3). It can be seen that the buried biaxial geogrid for sale in the semi-filled and semi-cute roadbed can significantly reduce the settlement of the roadbed and differential settlement.

The calculation of the slope safety factor in the software is based on the strength reduction method. The method unifies the strength reserve safety factor and the overall stability coefficient of the slope, and it is not necessary to determine the shape and position of the sliding surface in the finite element numerical analysis, so it is widely used in practice. The basic principle of the finite element strength coefficient reduction method is to divide the slope strength parameter (cohesion force and internal friction angle value) by a reduction factor F to obtain a new set of values and then input as a new material parameter, and then The trial calculation is carried out biaxial geogrid factory price, and the corresponding stability judgment criterion is used to determine the corresponding F value as the minimum stability safety factor of the slope body. At this time, the slope body reaches the limit state, shear failure occurs, and the most dangerous slip can be determined through the development of the plastic zone. Surface position (bright areas in Figures 3 to 5).

The slope is excavated and backfilled, but the wholesale biaxial geogrid is not buried in the backfill roadbed (Fig. 5). Due to the traffic load, the safety factor is reduced to 1.182 compared with the original slope. Due to the large difference between the mechanical properties of the filler and the natural formation properties, the potential sliding surface is at the junction of the fill and the rock formation and passes through the E point of the slope of the embankment slope.

The biaxial geogrid manufacturers are buried and the safety factor of the subgrade slope is increased to 1.600. At the same time, the potential sliding surface depth is slightly increased (Fig. 6), and it is at the E point of the embankment slope. The depth increase is related to the length of the biaxial geogrid for sale entering the cut section.

It can be seen that the addition of the high quality biaxial geogrid has a good effect on improving the stability of the subgrade slope at the junction of the filling and excavation.

5.1 laying of geogrid
(1) When laying biaxial geogrid manufacturers, its longitudinal axis should be consistent with the direction of the main force, generally pointing to the cross-section of the embankment;
(2) Since the vertical axis of the biaxial geogrid factory price is the main direction of force, it is not advisable to provide joint joints along the longitudinal axis. If it is avoided, the length of the lap joint should not be less than 0.3m, and the wire is tightly tied with lead wire;
(3) The laying of the biaxial geogrid manufacturers should be smooth and non-distorted and closely attached to the lower layer of soil.

5.3 Backfill
(1) In order to prevent the high quality biaxial geogrid from being exposed to the sun for a long time, it should be backfilled in time. The particle size of the backfill shall not be greater than half of the crushed layer;
(2) In order to prevent the construction load from causing damage to the high quality biaxial geogrid, the vehicle cannot walk directly on the paved grille during backfilling;
(3) The filling sequence should first fill the two ends of the biaxial geogrid manufacturers  and form a longitudinal platform or intersection, and then expand in turn;
(4) The surface of the backfilled earth material should be mechanically or artificially leveled, and the local height difference is not more than 5 cm;
(5) The sequence of backfilling and rolling should be crushed from the ends of the embankment to the center. The reverse sequence is strictly prohibited. The roller should be longitudinally operated along the embankment. It is strictly forbidden to perform horizontal rolling. The compaction test should be carried out in time during the rolling process.

(1) In this project, under the influence of traffic load, the mechanical properties of the subgrade soil and the uneven thickness of the soil layer, the maximum settlement of the road surface appears at the junction of filling and excavation. The buried geogrid in the filling section can reduce the settlement of the roadbed and differential settlement.
(2) Compared with the unreinforced roadbed, laying the high quality biaxial geogrid in the roadbed of filling and excavation can significantly improve the stability of the embankment margin.
(3) The most dangerous sliding surface common to natural slopes exists at the interface of soft and hard rock layers. The location of the most dangerous sliding surface of the embankment slope is closely related to the soil layer and the nature of the packing. After laying the biaxial geogrid manufacturers in the subgrade, the depth of the most dangerous sliding surface is increased compared to the unpaved.
(4) In order to ensure the quality of the reinforced embankment at the junction of filling and excavation, the laying, connection, fixing and backfilling of the high quality biaxial geogrid should meet the design and construction requirements.