After the cloth roll is completed, the tugboat drags the buoy to the front of the wharf and locates the square barge. The buoy is positioned parallel to the square barge and fixed with four anchor cables as shown in Figure 8. After the positioning is completed, fasten the two corners of the cloth head with SOm-long nylon rope, the cloth machine will drag the rope to the shore by the tug, and the cloth machine on the shore will drag the cloth roll to the shore, and the high quality filament nonwoven geotextile along the shore part behind the pier To flatten. The cloth spreader will cover the pre-cut holes on the row B and row H piles on the boat so that the cloth rolls are spread on the water surface. In order to prevent the cloth roll from shrinking and rolling during the sinking process, after the cloth is spread, a thin nylon rope is used to wrap the steel pile at the contact point between the cloth and the steel pile, and the two ends of the rope are tightly connected to the marked parts on the geotextile. There is a 20-30cm gap between the nylon rope sleeve and the steel pile to avoid the wire rope core falling on the steel pile during the sinking process of the cloth roll, causing the filament nonwoven geotextile for sale to sink seriously or fail to sink. 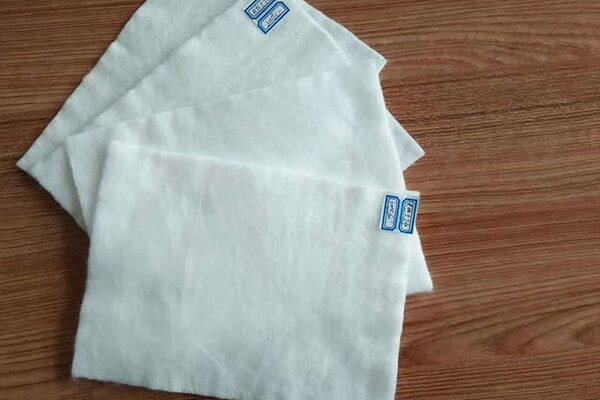 After laying two adjacent geotextiles with a width of 6m, overlap polyester nonwoven geotextile for sale should be laid. Cut the geotextile of the steel pile to the design size, and then use the sandbag to sink the geotextile into the bottom of the fire site. The diver spreads the geotextile under the water and presses it with a sandbag. The construction method of the 30m wide lap width on the coastal side of the wharf is the same as the 6m wide cloth width.