Experimental Study on Erosion Resistance of Geocells Under Artificial Rainfall

Abstract: It is of great significance to carry out quantitative research on the anti-erosion performance of red soil slope in the low hilly area south of the Yangtze River. Through the slope model experiment, the rainfall scouring tests of different slopes, different rainfall intensities and different cell types were carried out on the revetment of the red loam soil under artificial rainfall conditions. The anti-erosion performance of different cells was quantitatively analyzed. The results show that under the experimental conditions of rainfall, the geogrid has good erosion resistance and obvious effect on rainfall erosion protection of red loam slope, which can be popularized and applied in engineering practice.

Geotechnical cells first appeared in the 1980s. As a new type of geosynthetics, they have been widely used in geotechnical engineering for their excellent performance. The high quality gravel geocell can be folded and transported easily. After unfolding, it has a spatial three-dimensional structure, similar to a honeycomb shape. The sash can be filled with silt and gravel on the spot. The gravel geocell for sale is resistant to acid and alkali, corrosion, and good integrity, especially the gravel geocell for sale with perforated concrete. It has good drainage in the soil and is beneficial to improve the friction performance between the chamber and the soil. Plants that grow in the soil of the cell can pass through the small holes in the cell and act as a composite reinforcement.

At present, the research on gravel geocell for sale is mainly focused on the horizontal laying of reinforcement foundations in gravel geocell factory price. For example, Jin Shunhao has conducted in-depth research on the mechanism of geogrid-reinforced foundations; Yang Xiaohua et al. on geotechnical chambers on loess embankments and The application of highway slope protection has been studied. The research results of show that the geogrid has an obvious effect on the erosion protection of loess slope, which can generally improve the erosion resistance by 40%, and with the passage of time, the effect It will become more and more obvious that the smaller the size of a single cell, the better the impact resistance; Han Yan, Li Jin, etc. have calculated and applied the stability of the gravel geocell for sale in the slope protection; Wang Guangyue’s geogrid under rainfall conditions The stability of the room flexible slope protection was also calculated and analyzed. However, there are few studies on the anti-erosion performance of high quality gravel geocell slope protection under rainfall conditions.

In China, red soil is mainly distributed in the low hilly areas south of the Yangtze River, including most of Jiangxi and Hunan provinces, southeast of Fujian and Hubei, Guangdong, northern Fujian and Guizhou, Sichuan, Zhejiang, Anhui, Jiangsu, etc. In some parts of the land, as well as in southern Tibet, the study on the ecological protection of red soil slopes is of great significance. In this paper, the anti-erosion performance of the red soil geogrid slope protection under rainfall conditions is tested and quantitatively studied.

2.1 Test materials
The effective rainfall height of the equipment in the rainfall hall can reach 28m. The earth tank used is a variable slope steel tank. The slope ratio can be changed between 1:15 and 1:2.5. The size of the soil tank is 3m×1.5m×0.5m. Length × width × depth), a partition in the middle of the soil trough divides the soil trough into two parts of size 3m × 0.75m × 0.5m for simultaneous testing. The test soil used the most common Quaternary red loam soil in Dean County. There are 3 geotechnical chambers in the experimental study. The specifications are shown in Table 1. Other test equipments include frog type tamping machine, several U-shaped nails, 3 rain gauges, 36 beakers, 12 buckets (20L), stopwatch, 1 electronic scale with accuracy in grams per cent, and 1 set. Ordinary electronic scales (ranging from 0 to 80 kg), etc.

Note: The cell size is indicated by A-B-C, A is the cell height, cm; B is the cell weld distance, cm; C is the plate thickness, mm.

2.2 Test methods
In the test preparation stage, the initial moisture content of the backfill soil was first determined, and it was laminated into a steel tank according to the soil bulk density of 1.25 g/cm3, and compacted by a frog type compactor, each pressing 10 cm thick. Then, geotechnical chambers of different specifications are placed, and U-shaped nails are fixed on the sloped surface, the filling quality is calculated according to the water content of the soil, and then filled into the compartment gravel geocell factory price, and finally, the soil is compacted to the design height and Leveling. For the bare soil slope test, the control group was directly filled to the design height.

A total of 8 rainfall tests were carried out. During the rainfall test, water samples were collected from the left and right parts of the soil trough gravel geocell factory price. A total of 96 barrels of water samples were taken. Three samples of each bucket of water were taken as one group. After drying, weighing and scouring, Finally, 96 sets of flushing data were obtained. The slopes selected for this test were common 21.8°, 26.6°, 33.7°, and the test rainfall intensity was 50,100 mm/h and 150 mm/h. The schedule of each rainfall test is shown in Table 2. 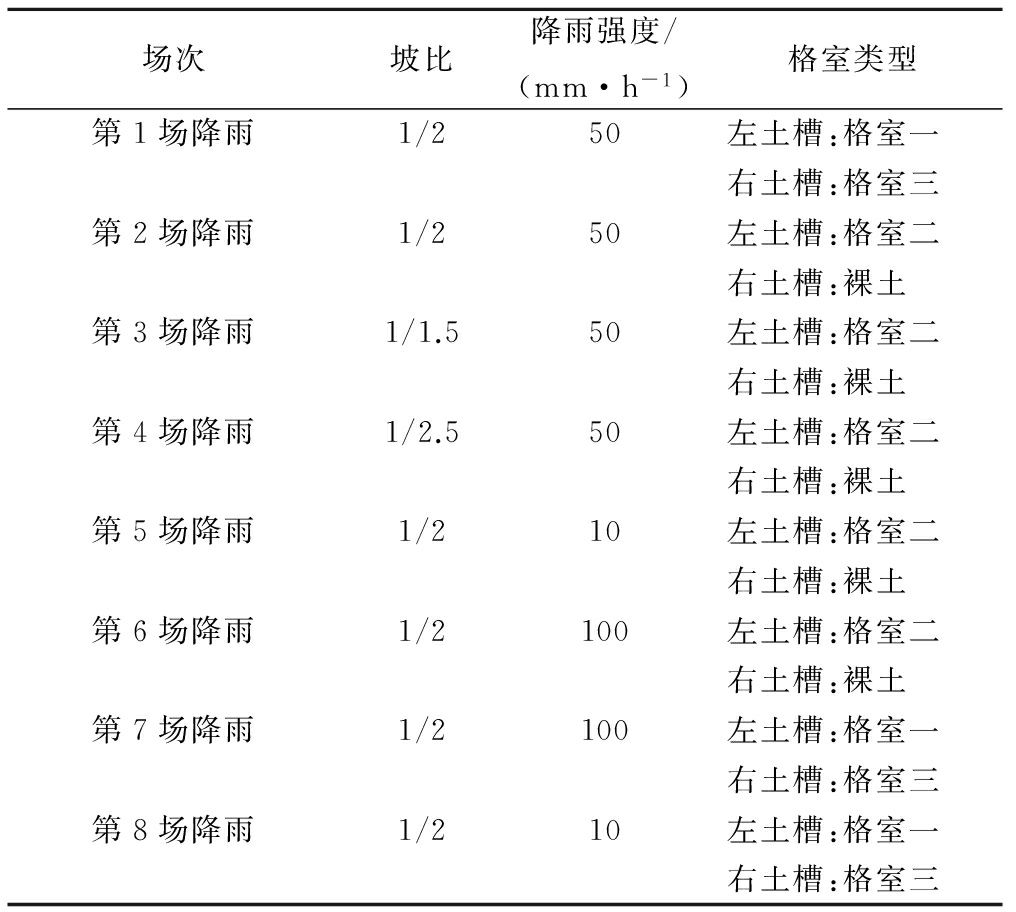 3. Analysis of the anti-erosion performance of geocell

Fig.1 The amount of flushing of the non-compartment slope under different slope ratios

Fig.2 The amount of erosion of the second slope of the chamber under different slope ratios

In short, the slopes of the two slopes with different slopes under the same rain intensity have more significant impact effects.

It can be seen from Fig. 3 that after 30 minutes, the soil erosion resistance of the lattice slope under three kinds of rain intensity is more obvious than that of the bare soil slope. In Fig. 3(c), before 15 minutes, the cumulative flushing amount of the bare soil slope is larger than the cumulative flushing amount of the paved slope. The reason for the analysis is that the slope surface of the compartment is relatively loose. When the rain intensity is large high quality gravel geocell, the water flow is relatively large, and the soil is more susceptible to water flow, so this period The amount of sediment flushing is larger than that of bare slopes. As the scouring time is prolonged, the function of the cell is better reflected, which not only hinders the water flow, but also the surface soil is protected by the space in the space and is not easy to form a long and long gully, but the bare slope will cause The scouring continues to produce some fine grooves or even gullies, which exacerbate the erosion of the soil. Therefore, the long-term flushing will cause the total erosion of the bare slope to exceed the slope of the paved compartment. 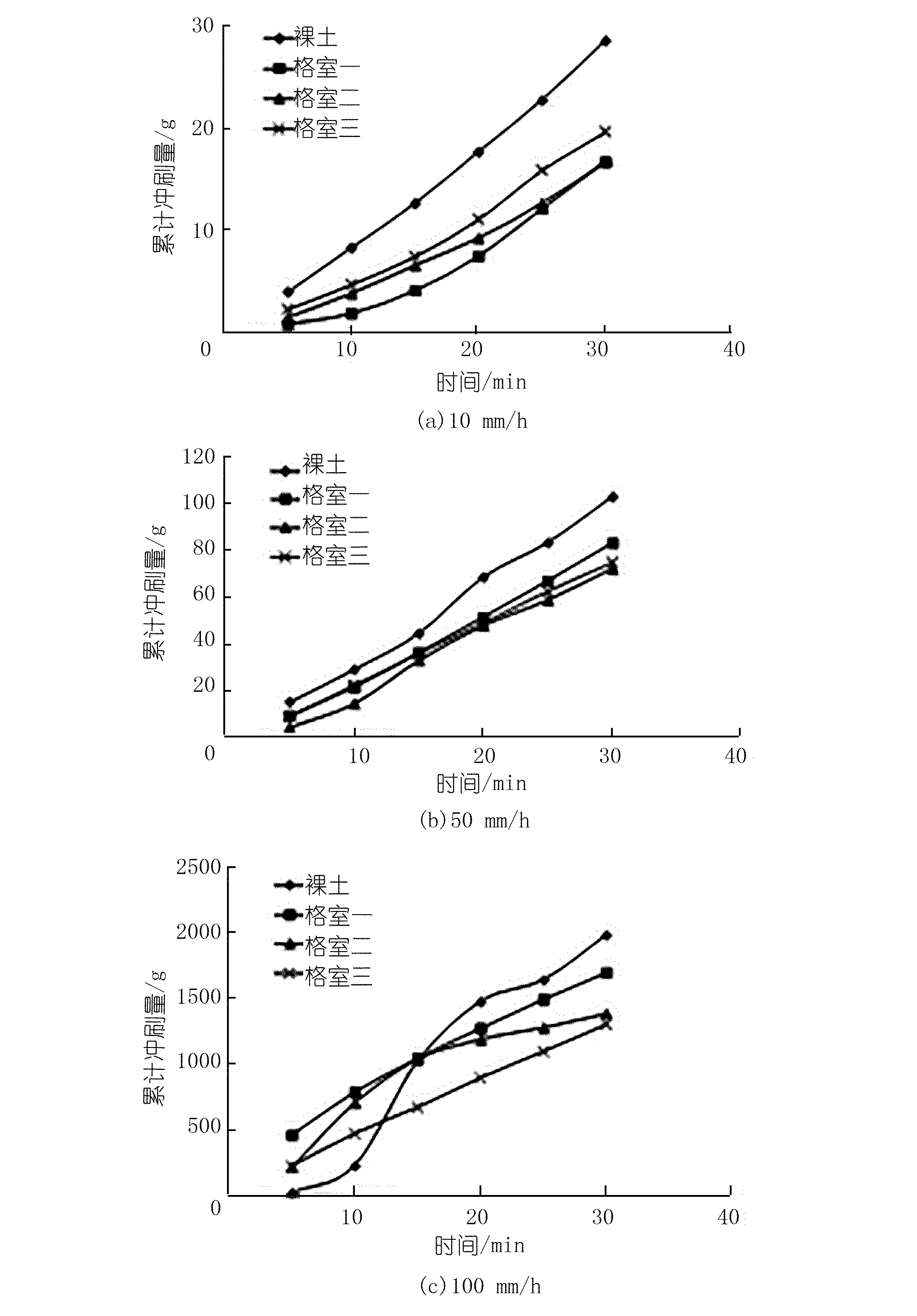 After 30 minutes of rainfall, under the rain intensity of 50mm/h or 100mm/h, the test results are consistent with the erosion test of the loess slope by the gravel geocell factory price made by. The general trend is that the smaller the grid sash, its erosion resistance. The better. However, the anti-scourability of compartment 1 is relatively poor. The total amount of flushing between compartment 2 and compartment 3 is not much different. The reason is that the smaller the grid, the better the erosion resistance of the solid soil. The smaller the grid is, the more difficult it is to fill the sash and the more difficult it is to construct. The compartment 3 is too small, and the soil in the sash is looser than other compartments. When the rain intensity is small, that is, 10mm/h, the slope is mainly affected by the splash of raindrops, and the soil on the slope of the three slopes is relatively loose, so the erosion of the slope is large (see Table 4 for details). 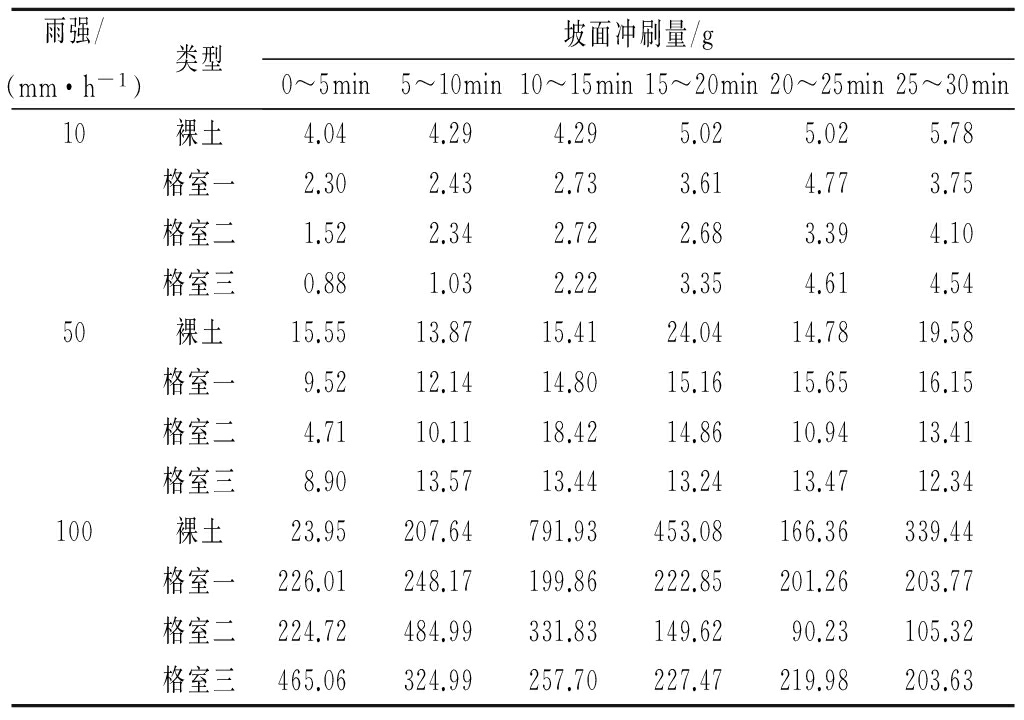 The effects of different artificial rainfall intensity on the impact performance were analyzed by the amount of sediment flushing of different rain strength downhills.

(1) The geotechnical chamber has a certain protective effect on the rainfall scouring of the red soil slope. With the continuation of rainfall, the slope protection effect of the compartment will become more and more obvious. This is related to the observation of the slope protection experiment of the geotechnical compartment of the loess slope by Wang Guangyue et al. Basically the same, there is a certain mutual reference between the red loam soil and geogrid slope protection and the loess geogrid slope protection.
(2) The smaller the grid frame is, the better the rainfall resistance of the red soil slope is, but the smaller the grid is, the more difficult the construction fill is, which is easy to affect the protective effect of the compartment. Therefore, the type of compartment should be based on a specific project. Need to make a choice.
(3) Under the condition that the rain intensity is 50mm/h and the slope length is constant, the slope is 21.8°～33.7°. With the increase of the slope, the erosion resistance of the gravel geocell for sale slope is first reduced and then increased, and the slope is 21.8°. At the time, the erosion resistance of the high quality gravel geocell slope is the best.

In summary, the gravel geocell for sale has an obvious protective effect on the rainfall erosion of the red soil slope, which can be promoted and applied in engineering practice.