The smaller the geotextile spacing, the smaller the amount of erosion, the better the protection effect; the erosion of the silt protection of the convex structure is 40% less than that of the non-convex structure, and the protective effect is better. The raised structure can slow down the flow rate of rainwater and intercept the loss of sediment, so as to achieve a better protective effect. In geotextile protection, filament nonwoven geotextile for sale can intercept sediment and reduce sediment erosion. 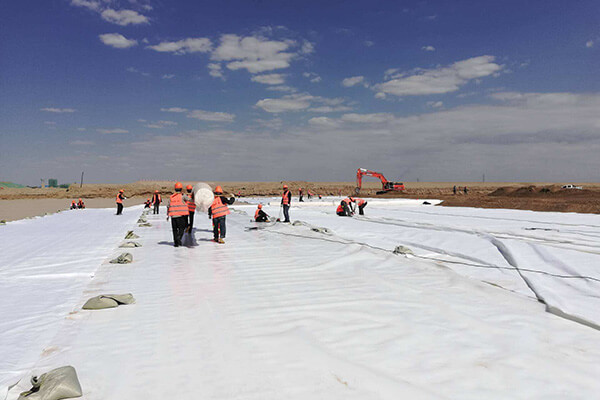 Among the many forms of protection, the 20 cm pitch raised structure has the best protection effect. It can be used in actual projects to achieve the best ecological and economic benefits.

The slope protection structure is made of the polyester nonwoven geotextile factory price, which is processed and cut to a certain size and is used for ecological protection of the slope in the rainstorm area of ​​southern China.

2. Slope compaction. The slope is compacted in layers, each layer is 20 or 30cm, and it is compacted with a hammer from bottom to top. After pressing a layer, use a spatula to cut off the excess, and then use a spatula to scrape off the soil. Then lay polyester nonwoven geotextile for sale, buried 8 cm deep, covered 8 cm. The convex structure is buried 8 cm deep, and a semi-circular convex with a radius of 4 cm is set, and the wholesale polyester nonwoven geotextile covers 8 cm. Then fill the next layer of soil until the entire panel slot is filled.
3. Rainfall erosion. Use nozzles to spray water to simulate rainfall, the rainfall is kept at about 5 mm/min. The rainfall is measured by a rotameter and a water meter. Each time it rained for 10 minutes, a total of 6 spots of rain. The rainfall area can be adjusted through the nozzle so that the rainfall area is evenly distributed on the entire slope.

4. Rainwater collection. When it rains, the rainwater is collected by the sump, and the collected water and sediment are put into different sump barrels, weighed and recorded. Dry each sump to obtain sediment content.