With the increasing use of geosynthetic materials in civil engineering construction, especially a large number of applications in flood control and rescue projects have a good effect so that the majority of engineering and technical personnel attach great importance to wholesale textured geomembrane materials, but for geomembrane materials, The use of is also limited by time, so how to effectively slow down its aging rate has become an important issue.

Regarding the application technology of geosynthetics, the state has put forward standard technical requirements in terms of anti-seepage, filtration, drainage, reinforcement, protection, etc., which has greatly accelerated the promotion and application of new materials. The aging phenomenon of anti-seepage LDPE geomembrane factory price is one of the inherent characteristics of polymer materials, which cannot be completely eliminated, but effective measures can be taken to delay its aging rate.

Generally, in order to delay the aging speed of the wholesale HDPE geomembrane, an anti-aging agent can be added to the raw materials to suppress the effect of external factors such as photo-oxygen and heat on the material, such as the appropriate amount of antioxidants, light stabilizer and dark carbon black. Adding an anti-aging agent to polypropylene directly exposed to sunlight for 4 years, the strength only loses 25%, and the intensity will be completely lost if it is directly exposed to sunlight for 2 to 3 months without adding the anti-aging agent. 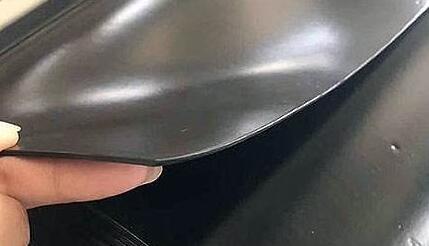 In the geomembrane anti-seepage project, once the HDPE geomembrane manufacturers have defects, its prominent hazard is the defect seepage problem. Although people have noticed the problem of membrane leakage, due to the complexity of the problem, there are few relevant studies that generally believe that the membrane causes product quality consistency because the pore size is significantly smaller than the thickness of the membrane, and the leakage can be calculated by the formula.

Because the leakage of this defect is very small, it will not affect the safety of the earth-rock dam. The macro defect shape of various geotextiles has large randomness. In addition to the obvious gap defects, since the equivalent pore diameter of most geomembrane macro defects is significantly greater than the thickness of the high quality HDPE geomembrane, attention should be paid to leakage problems.