The cutting of the round head part first calculates the half-circle length of the round head according to the circumferential formula c = 2πr divided by 2. Lay the line along the top impermeable membrane to determine the width of each top. In addition, it is necessary to pay attention to the 15cm suture width when cutting. If it is too narrow, the number of laps of the impermeable membrane will cause waste, and it does not meet the requirements for funding control.

The length of the outer line is laid according to the cutting width of the impermeable membrane, except for the anchoring end, the remaining three sides are reserved with 10cm wide splicing seam tape, and the outer line is laid along the scale of 1: 100 with a compass. The width of the bottom and the width of the top must be the same. After each impermeable membrane is sutured, it is more suitable to be 20m wide. The one on the side is left with a width of 15cm, and the middle is left with a width of 30cm. 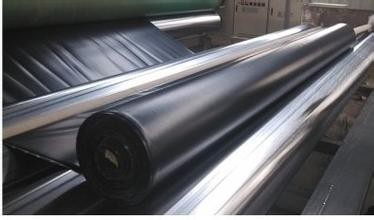 The measurement method of width deviation is almost the same as that of quality deviation: in the same batch of products of the same specification, draw 6 to 10 volumes of soil for corresponding measurement, and the measured width is added to the average to get the actual width, the actual The width obtained by subtracting the specified width and divided by the specified width is the deviation of the width.