I often hear people talking about geotextile waterproofing, so I’m very confused, so here we talk about geotextile, geomembrane, and bentonite waterproof blanket. These three materials all belong to the category of geosynthetics.

There are many types of geosynthetics, which will not be expanded here, just briefly talk about geotextiles, LDPE geomembrane for sale, and bentonite waterproof blankets.

Geotextiles come in various types according to different classification methods. According to whether there are clear warp and weft threads, we are divided into non-woven geotextile and woven (or woven) geotextile. Under normal circumstances, we often use non-woven geotextiles as a filter to allow water to pass through, but small soil particles cannot pass through. This usage is often used on the back surface of a dam. Prevent the water from taking away the fine particles in the soil, thus forming a large infiltration channel. Woven cloth is generally used for reinforcement in engineering to increase the strength of soil in a certain direction.

Geotextiles, especially non-woven fabrics, look more like ordinary cotton cloth (not necessarily accurate) and are mostly white. There are also many impurities, showing other variegated colors. Woven cloth, similar to a snakeskin bag (cut open), is also not waterproof.

Geomembrane, which looks like plastic cloth. In fact, it is plastic cloth, various engineering plastics are extruded to form a film-like thing. This thing is waterproof. Under normal circumstances, water cannot pass through unless it is rotten (it is still easy to rotten), or the joint is not well welded. 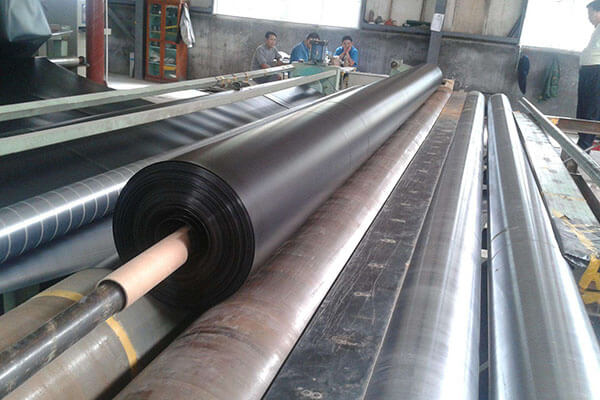 Many people describe geomembrane as a geotextile. Why?
The Chinese have given great play to their ability to re-creation and invented a four-different thing called “N cloth one film”. N generally takes 1 or 2. Also called “composite geomembrane”. It is a kind of sandwich biscuits. Use two layers of geotextile with a geomembrane in between. In imagination, the geomembrane is used to prevent seepage, and the geotextile is used to protect the environmental geomembrane for sale. In fact, the role is not very effective. Haha. But because there are geotextiles on both sides, it is similar to geotextile, but in fact, its main function is to prevent seepage, which is different from the filtration effect of geotextile.

“Composite geomembrane” is used a lot in China, but in fact, it has three problems. 1. Geotextile is not strong enough, it is basically self-deception to say that it can protect the membrane; 2. Two layers of cloth and one cover, no one knows whether there are holes in the membrane; 3. The two layers of cloth are burned to the membrane by welding Up. A good mulch may cause a big hole to burn. Therefore, “N cloth one film” is a very flickering product. The Chinese invented and exported to Africa and many other third and fourth world countries, creating a large amount of foreign exchange for our country. In this sense, it is also a good flicker product. Now domestic designers gradually realize that this thing is very foolish. My advice to everyone is: If you want to use a film, use a bare film, and use a thicker, high-quality bare film. Preferably imported membrane. Otherwise, I would rather not use it. There are also many categories of bare films, such as PE, LDPE, HDPE, PVC, and PP. The various products vary greatly. If the cost allows, it is recommended to use HDPE.

Let’s talk about the bentonite waterproof blanket. This is a relatively new type of geosynthetic material for seepage prevention. It uses two layers of geotextiles, through a needle punching process, to sandwich a layer of sodium-based bentonite to form something like a blanket. Its anti-seepage mechanism is different from aquaculture geomembrane manufacturers. The geomembrane relies on the chemical properties of its own material, and the anti-seepage of the bentonite waterproof blanket relies on the sodium-based bentonite in the blanket. Sodium-based bentonite has a characteristic. It can expand many times when it encounters water. Due to the pinch restriction of needle punching, it can only squeeze each other in the plane to form a continuous anti-seepage unit.

At present, bentonite waterproof blankets have been widely used in artificial water bodies with landscape properties, and the effect is good. There are individual effects that are not good, it is likely that the sodium bentonite used does not pass. Or the acupuncture process is not enough. It is a product quality issue.

However, bentonite waterproof blankets still have great potential in anti-seepage applications such as rivers, reservoirs, and channels. Because manufacturers have not promoted them enough, there are not many applications at present. Soon the new specifications will give this material more room for development, and everyone will have a good choice when choosing impermeable materials.