1. The environmental hazards of hazardous materials such as garbage and slag in sanitary landfills and tailings are mainly caused by leachate pollution to surface water and groundwater. Therefore, scientific and rational design of anti-seepage system becomes the key, and the impact prevention The key to the quality of the infiltration system lies in the performance, quality and construction technology of the impervious material.

2. The domestic LDPE geomembrane for sale index implements the GB/T234-2006 standard, and the foreign manufacturer’s material index implements the ASTM (International Material Testing Association) standard, which is higher than the national standard (GB/T234-2006) and is an international standard. It is authoritative and recognized by the same industry at home and abroad.

3. Production process. The HDPE geomembrane currently widely used in anti-seepage engineering is made of high-density polyethylene resin. Additives such as carbon black and antioxidants are added to the production process to ensure durability in various environments. China’s environmental protection business started late, and the production of HDPE geomembrane is still in its infancy. The research, development, and application of geosynthetics began in the early 1980s, and it has only been more than 20 years since its development. However, basic theoretical research and experience are still very lacking. The production of domestic membranes generally adopts the round membrane process, while the imported membranes adopt the flat extrusion process and the round membrane process according to the actual conditions. The flat extrusion process has higher production cost and complicated process than the round membrane process, but the quality is good. 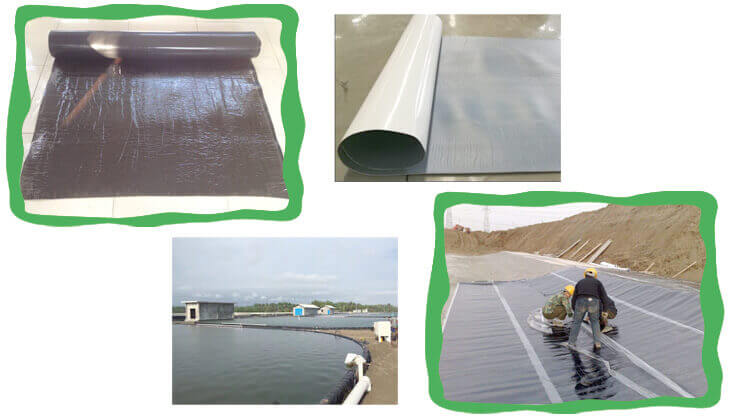 5. Stability and reliability. For environmental engineering, the reliability and stability of engineering quality are especially important. In most environmental projects, once engineering defects occur, the losses and consequences are serious. Since the GSE company has been in production for 50 years, due to the good material stability, the CV value of the product inspection is low, and there has never been a traceable material safety accident in practical applications. The quality of domestic geomembrane materials is generally poor, the CV value is high, and safety accidents occur frequently in engineering use. Many materials are cracked and damaged even before use. In recent years, media and network reports on leakage accidents in this area are not uncommon. This is also the reason why most large and medium-sized cities in China generally use imported materials in the construction of urban waste sanitary landfills.

6. Economic and social benefits. From the perspective of total investment during the construction period, the use of imported membranes is 10-20% higher than the total investment of domestic membranes. However, due to its advanced technology and unique raw material quality, the life of imported membranes is higher than that of domestic membranes. About 30%, and better than domestic film can resist the interference of external environmental factors (foundation treatment, construction, improper operation, etc.), reducing the possibility of geomembrane damage and reducing the hidden dangers of environmental safety accidents. In the long run, the social benefits generated are enormous and cannot be measured by money.