There are two functions between flexible geomembrane and its relatively rigid foundation and protective layer, namely, the relative fraction of the interface and the coordinate deformation in the same direction. The external environment such as pond water storage and icing can act indirectly on the HDPE geomembrane factory price impermeable layer through the protective layer. The geomembrane at the anchorage trench is prone to stress concentration. It is recommended to follow the principle of “pull and continue” in the design and construction of the anchorage trench.

After the construction of an anti-seepage structure and slope protection, the water storage function of the evaporation pond must be exerted. In view of the difficulty in the simulation of fluid-solid interaction, it is not necessary for the purpose of the study. At this stage of the simulation HDPE geomembrane for sale, the hydrostatic pressure after water storage is applied to the slope protection in the form of mechanical boundary conditions to simulate the effect of water storage in the evaporation pool

After water storage in winter, ice sheets with a certain thickness will form on the water surface, and the lateral expansion of the ice sheets will exert a certain force on the bank slope. This stage mainly analyzes the effect of frost heave force on the anti-seepage structure. Similarly, in this simulation, the solid model of ice is not directly established HDPE geomembrane manufacturers, but the calculated ice pressure and ice layer thickness are applied to the slope at the corresponding position in the form of mechanical boundary conditions. 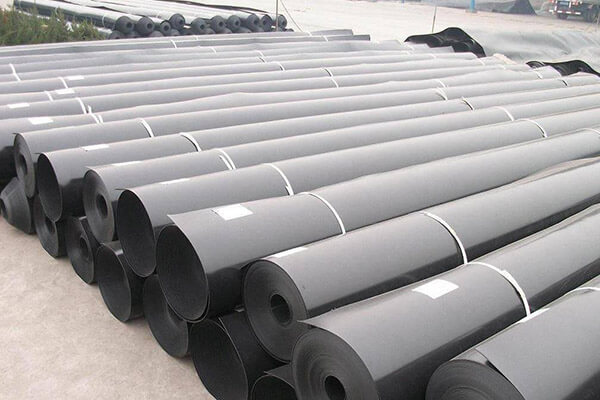 The maximum tensile stress of the anti-seepage geomembrane after anchoring is located on the sidewall of the anchoring groove, which is about 2.34 kPa, which is far lower than the yield strength of the geomembrane.