Roads, subways, railways, and other tunnels often have different degrees of leakage due to various factors. Leakage is one of the rare diseases in the tunnel, which seriously affects the life safety of the tunnel. At present, most of the tunnel construction uses the mining method or the new Austrian method. The tunnel structure is a composite lining structure. The waterproof layer is usually set between the primary support and the secondary formwork reinforced concrete. High-density polyethylene HDPE geomembrane produced by aquaculture geomembrane manufacturers, as the secondary waterproof material of the tunnel, has long been lost abroad.

In the name of highways, railway tunnels, and subways, a rare construction form is veneer lining. After the anchor spray layer is completed, the non-woven geotextile is fixed on the hole wall with nails and gaskets, and then the HDPE geomembrane is welded to the gasket as the initial structural lining. It is also possible to use nails to fix the polyethylene geotextile and nonwoven geotextile on the anchor spray layer, and then weld the polyethylene geotextile to the soil nails to prevent the construction of the lining. 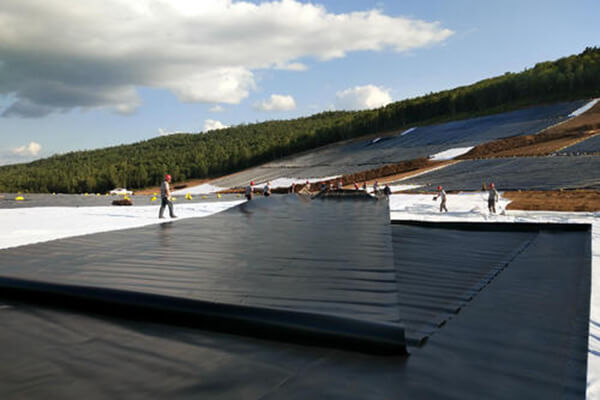 The non-woven geotextile is used to prevent the polyethylene geomembrane from being damaged by sharp objects on the wall of the cave. The other is to introduce leakage into the blind ditch on both sides, and its specification should be more than 200g/m2. Part of the project uses a 40-60mm thick polystyrene board instead of high-density polyethylene wholesale HDPE Liner made in China, which must be determined according to engineering practice: when the base layer is abnormal, non-woven fabrics should be used. Non-woven fabrics can resist tension in different directions; When using a flat polystyrene board, the original polystyrene board should be lower.
1. Impermeability: Polyethylene is an impermeable material because of its chemical structure. The permeability of the HDPE geomembrane is usually very low and can be ignored.
2. Different anti-aging function: Since HDPE is not easy to degrade, the product is hidden in the open structure, so its service life is longer than other data.
3. Anti-stab, anti-erosion, and anti-stab. HDPE geomembrane can be used in landfills and planting roofs to avoid tree root thorns, resist sharp objects, resist tree root thorns, and resist erosion in various simple environments.